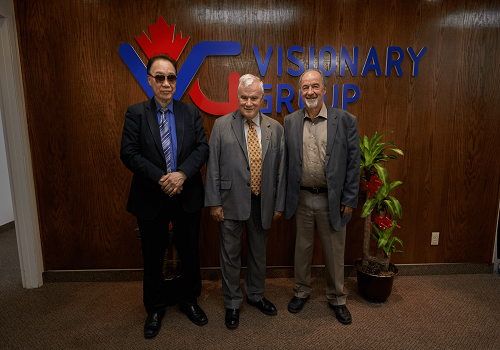 As an independent director, Hor. Peter Milliken has been very inspirational to all who have the privilege to work with him at Visionary Group (VG). The knowledge and expertise he has acquired in his amazing career is a great asset for us. He was a member of the House of Commons of Canada from 1988 till his retirement in 2011 and served as Speaker of the House for 10 years beginning in 2001, the longest-serving Speaker in the history of Canada.
Peter spent two days in VG’s new head-quarter in Markham starting on July 29, 2021. The senior management team, led by vice Chairmen Kenneth Chan, Chief Academic Officer Dr. Harley d’Entremont and CEO Dr. Zack Liao, presented the business development plan and facilitated a very productive discussion with Peter. Peter was very impressed by the achievement that VG had made during the challenging COVID-19 period and the visionary plan for expanding in the future. They have also discussed the progress of IPO process which is proceeding according to the original plan. Peter expressed his gratitude toward to all the hard-working staff members and provided very thoughtful guidance for the successful operation of our rapidly growing business.
On the second day of his stay, Peter also joined an important meeting with Dr. Tom Traves, Chairman of VG’s Board of Director, in which the strategy and implementation plan for future development of VG has been thoroughly discussed.

On Jul 30, 2021, Dr. Tom Traves, Chairman of VG’s Board of Director attended a working meeting with the senior management team, led by vice-Chairmen Kenneth Chan, Chief Academic Officer Dr. Harley d’Entremont, and CEO Dr. Zack Liao. A member of the Order of Canada, Tom was a former Chairman of the Board of The Association of Universities and Colleges of Canada, a former president of Dalhousie University and Brock University. Tom has brought his exceptional expertise in a broad range of areas, especially in education and management, to VG over the last few years.
In the meeting, Dr. Liao presented the academic structure and commercial strategy. VG provides high quality of education and services at a wide range of levels, including OSSD (Ontario Secondary School Diploma), college, university, and graduate. The successful operation of this comprehensive business is supported by four principal features of the Group, including a very effective and supporting board of directors, physical campuses consisted of three buildings with over 160,000 square feet of floor area, AI (Artificial Intelligence) and VR (Virtual Reality) based innovative pedagogical solutions, and a rapidly expanding marketing network in Canada, China, India, Brazil, Philippine, and Vietnam. Dr. Liao also provided details about Toronto Animation and Film Industry Park (TAFIP) located in the city of Markham and Canada Innovation University Town (CIUT) located in Toronto.
Tom congratulated all the senior management team and the entire staff for their productive hard-work. He also expressed his satisfaction for the current status of the Group. After a thorough discussion with the senior management team, Tom is very convinced that VG is in a great shape to advance and will certainly be a successful company. Tom promised that the board of directors would continuously enhance the support to the operation and expansion of the Group.
In the end, he said to the team: “Thank you all for the work you have performed for the success of our company. I look forward to attending the next board meeting.”

How to submit your mark to OUAC